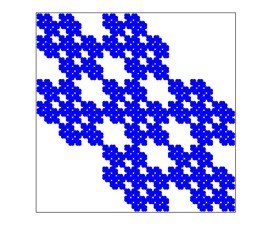 The paper details are:

The paper showed how to generate realistic graphs, using recursion and self-similarity. Not only the resulting graphs obey several “power laws” that real graphs obey, but they also have a very simple, recursive mechanism, the so-called Kronecker matrix multiplication, that has been studied extensively, and leads to simple and elegant proofs about  the graph properties. Its simpler version, “RMAT” is the basis behind the  graph500 benchmark  which is used to generate benchmarks for supercomputer competitions on graph analytics.