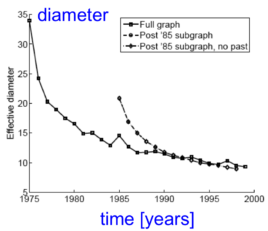 KDD is the flagship conference for large-scale data mining. Jure was a phd student at SCS/MLD (and currently a professor at Stanford). Jon was visiting CMU for his sabbatical. The paper made the surprising discoveries that real graphs become denser over time, following a power-law pattern, and that their diameter shrinks (as opposed to growing slowly, that was the common wisdom until then).

The paper had already received the ‘best research paper’ award in KDD 2005.