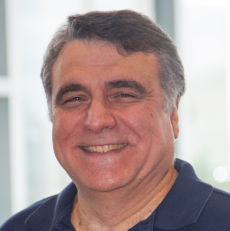 Christos Faloutsos received the B.Sc. degree in Electrical Engineering (1981) from the National Technical University of Athens, Greece and the M.Sc. and Ph.D. degrees in Computer Science from the University of Toronto, Canada. Now he is a Professor at Carnegie Mellon University. He has received the Presidential Young Investigator Award by the National Science Foundation (1989), the Research Contributions Award in ICDM 2006, the SIGKDD Innovations Award (2010), twenty “best paper” awards (including two  “test of time” awards), and four teaching awards. Five of his advisees have attracted KDD or SCS  dissertation awards. He is an ACM Fellow, he has served as a member of the executive committee of SIGKDD; he has published over 300 refereed articles, 17 book chapters and two monographs. He holds eight patents and he has given over 35 tutorials and over 15 invited  distinguished lectures. His research interests include data mining for graphs and streams, fractals, database performance, and indexing for multimedia and bio-informatics data.