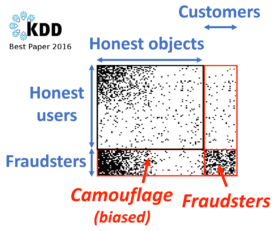 KDD is the flagship data mining conference. The award ceremony was on Sunday Aug. 14, in San Francisco. The paper was selected out of over 700 submissions, and among 70 accepted papers. The paper gives a fast, scalable algorithm to find dense blocks in an adjacency matrix, with provable bounds, and excellent fraud detection accuracy in real data (on-line product reviews, twitter who-follows-whom data). The algorithm is able to ignore ‘camouflage’, that is, attempts of the fraudsters to mimic ‘normal’ behavior.

See the SIGKDD website for more information about the award.

Christos and his team also won the 2016 SIGKDD ‘Doctoral Dissertation’ Award and ‘Test of Time’ Award.